If your energy bill is higher than you’d like, there’s one simple item you can change in your home that could have a huge impact: lightbulbs! You may think the type of lightbulb you use doesn’t make much difference, but the truth is otherwise: Your house most likely has a lot of lightbulbs, so the overall effect will add up.

LED lightbulbs offer an array of benefits that can help you save money and reduce your environmental impact. Here’s a brief list of difference; LED light bulbs vs traditional light bulbs: 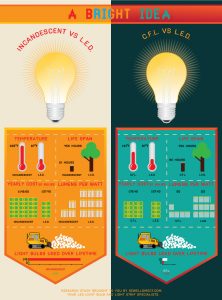 Why make the switch?

You know that yellowish glow from regular lightbulbs that makes everyone look bad? You won’t have to worry about it with LED lightbulbs! LED lightbulbs use a mix of red, green and blue LEDs to create the clear white light they give off. And if you feel like switching up a room’s ambiance, LED lightbulbs often come with color-changing options, so you can go from soothing blue to hazy red with the click of a button.

Prices down, savings up